As many of you know, I was in the United States in July and part of August.  The main reason was to attend the (big breath…!) Summer Writing Program of the Jack Kerouac School of Disembodied Poetics at Naropa University in Boulder, Colorado.  I first heard of the School  in the late 1990s, when I found an anthology of writing published by them, and bought the book partly out of cautious curiosity – how could poetry be “disembodied”?  And should it be?

Anyway, in the last year or so, I found myself feeling a little unsatisfied with my poetry, feeling I was beginning to repeat myself.  I wanted to give myself a jolt of poetic input, to be challenged, confused, encouraged and expanded.  So, a four-week schedule of workshops, readings, talks, panel discussions, meetings and mentoring, all held at the foot of the Rocky Mountains, with a roster of writers including Anne Waldman, Amiri Baraka, Anne Carson, Rae Armantrout, Jerome Rothenberg and Ron Silliman…  hmmm, let me think about that – YES.  And thanks to Copyright Agency, who gave me generous funding, I could attend and not come back entirely broke.

It is impossible to capture my time in Boulder in all its sunshine, rigour, shivers and momentum.  But I can give you some hints.

After I moved in to my sub-let on University Hill, while I was wandering around town looking for something salad-like for lunch, I noticed a guy looking at me fairly intently, curious.  Normally, I’d feel a little suspicion or anticipatory resentment, but I’m not at home and I’m determined to be open.  “Is that scoliosis?”, he asks.  So, I say yes, tell him the brief Marfan story.  He tells me he has a slight scoliosis and a lot of pain – when he was a little kid, in the 80s, he and his brother would play at professional wrestling (WWF-style) and he was slammed down onto concrete.  We talk for a while about how invisible pain is, how everyone’s story is different.  He asks me why I’m here; I tell him about Naropa.  Turns out he grew up next door to one of the founders Chogyam Trungpa, which is another story…  But something of the outgoing, genuine, unpretentious nature of this conversation is (to me anyway) very American… 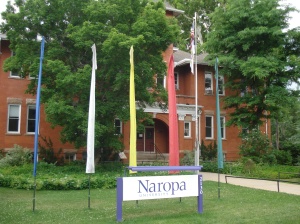 Each of the four weeks at the Summer Writing Program, you choose a different workshop.  I was with Rikki Ducornet, Rae Armantrout, M Nourbese Philip and Anne Waldman.  We grafted our own writing onto fragments of Herodotus, extending threads into the surreal or hyperreal.  We took famous poems and (out of homage or critique or both) rewrote them into another era or voice or gender.  We recorded a collaborative performance poem in the studio.  We talked about imagination, research, appropriation, colonialism, modernism, rupture and environmental crisis, and of course a million other things.  If there was an overarching theme to the Naropa approach, I would say it’s a passion to integrate research and intuition within poetry, and to engage the writer’s own body in the writing process.

In Nourbese’s workshop, we were to tell our own story, one at a time, in a circle.  But we had a time-limit.  And when the automatic timer went off, no matter how intimate or mundane or traumatic (or mid-sentence), our story would have to stop and the next person start.  The accumulating, visceral sense of interruption accumulated, a palpable absent space, one that also was a kind of communion.  We wrote out of that space, not to fill it in, but to respect it and allow it to speak.

There were many rigorous lectures, thought-provoking panel discussions, powerful performances and readings, and in between sessions some rich conversations.  Some of us meditated in the mornings.  Some of us had tacos and beer in the evening.  There was blue summer sky, horizontal clouds, afternoon storms, and the mountains surrounding us.

I have a whole lot of unfinished poems in my journal to revisit, a percolating idea for a long poem, and many thoughts and provocations to sort through.  And many new friends and colleagues.  We keep hiking…