Two weeks in, and I have yet to step foot inside a hospital.  Well, ok, I did walk into the Apollo, but more on that later.  For now, let’s just say the mood is ambivalent.  I’ve been writing poems, and I think some interesting things are coming out, but they’ve mainly been about the initial frisson of arrival, the spectacular differences and the struggle of bridging cultures.  Nothing yet about “medical tourism”.  All the contacts I have either don’t get back to me, or are in meetings, or want me to send them emails…  But, as India teaches you, you have to keep pushing – with a soft fluidity as well as a vigour.

The staff at the University of Madras have all been gracious and welcoming.  I have a room set aside for me on the rooftop of the main building, which overlooks Marina Beach and fills up with the sea breeze.  They’ve also continued to reassure me that the extent of my involvement at the University is up to me; that my poetry-writing is the priority.  We’ve organised a few things though, all at the University’s English Department –

Apart from the Uni, all my contacts with people have been accidental.  I met a lovely guy from Hyderabad who was staying at my hotel, who shouted me lunch (“it’s our duty”) and asked me what I hate about India the most, and what I love.  For the record, I said its poverty and its strength.  Which made me wonder about the relationship between the two…  While I was at my room at the Uni, Syam Sudhakar waltzed in to meet me.  He was actually at the Queensland Poetry Festival in 2009 (I was there in 2008 and 2010!) – he’s a fine poet, too – while we were chatting, he got mail, a copy of a journal with two poems of his in it.  Oh, and I was also (gently) harrassed for money by a group of hijras, laughing as one of them took my hat and wore it… 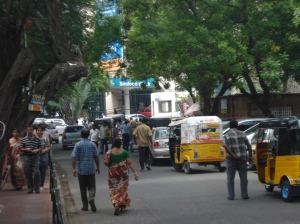 Anyway, so, as I was saying, I did walk into the Apollo Hospital the other day.  I took a long, tiring walk to Thousand Lights (a few suburbs away from my hotel) to get a sense of what this renowned hospital is like – who goes there, what surrounds it, etc.  At a distance, I thought I saw it, but it was actually a luxury hotel – oops, Andy, don’t get carried away.  Apollo is of course a large medical complex, and it clearly has some money behind it, but it looks more like a standard country hospital.  The main difference being the huge crowds.  Hundreds of bikes and motorbikes are out the front.  Autorickshaws cruise the exit for customers.  Families wait in groups outside.  In the waiting room, it’s hard to move – dozens and dozens of people sit, stand, lie, pace, all without much apparent distress or frustration.  I can’t imagine everyone would be seen on the day they come.  But it seems accepted that this is just how it is.  In the corner is a sign that directs “international patients” to a separate cubicle.  Which reminds me of the time I went to a doctor in Kalimpong, West Bengal, three years ago – I was rushed to the front of the (albeit small) queue, and felt acutely relieved and ashamed.

The other thing I’ve noticed is the number of gyms here (which I didn’t notice in the north or centre of the country).  Wondering what that implies…

Oh, and where I’m staying – Sangeetha Residency in Mylapore – is pretty good.  It’s got all the basics you need and the buffet breakfast is part of the deal (mmm, idli…).  The choice you have to make is between a room with a window onto the inner car-park, which makes it feel like a cell, and a room that overlooks the road, which is almost always a cacophony of vehicles honking (and now that it’s Diwali, so many crackers and fireworks exploding through the night, which makes the air look like a thick fog and sounds like a small war!).  I prefer the latter.  You may prefer neither.

And below, some important places for Deepawali – temple, and a shop for fireworks…!