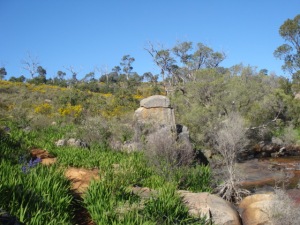 As some of you know, I’ve been, as the euphemism goes, “between jobs”. Nine months after finishing a post-graduate course, I’d lost count of the number of positions I’d applied for, I’d been to about a dozen interviews and been knocked back in many varied polite and complimentary ways. What I’d wanted was to have interesting part-time work that would leave me with enough energy and time to write. All I had so far was time. And, perhaps paradoxically, I wasn’t doing much writing.

I did have something to look forward to, though.  A four-week residency in Perth.

When I arrived at the Katharine Susannah Prichard Writers Centre, it was dark and one part of me was still in the plane, another still in Melbourne. This clean, simple room was to be my home for four weeks. I went for a walk – found suburban mansions, barking dogs and a rushing freeway. But, with a healthy dose of disorientation making things seem a little super-real, I also started to find my feet, and the start of a first poem.

As time went on, I covered a lot of territory. I walked through quite a chunk of the John Forrest NP, up and down almost all of the surrounding Greenmount suburban streets, around Midland’s shops and bus terminals, through the city in the shadow of cranes, and across the surface of Fremantle, wondering about its depths. I was also (thankyou Mardi!) driven around the Swan Valley, as the sun broke across vines and a still-being-completed Memorial Park for Yagan. I also went a long way while just sitting in my room – language and silence, human and animal, solitude, racism, public transport, parenthood, love, history, and more.

I wrote more poems in the four weeks of the residency than I wrote in the twenty weeks before it. This got me thinking – what is it that makes the difference? In what conditions does creativity flourish? It can’t be purely a question of the amount of time on my hands. It seems to me that it’s a complex cocktail – a blend of elements that is impossible to define precisely. But the most important factors to me seem to be a balance of familiarity and strangeness, home and holiday, stillness and stimulation. Plus, that most invaluable resource, time.

There is never any guarantee, but KSP helped bring these elements together. There is a wide window that draws in the sun, the trees, the flashes of parrots flying past. There’s a kettle for coffee. There’s internet access (to track down secondhand bookshops, plot a public transport journey, do important and trivial research, and stay in touch with home). Just up the hill, in the house, there’s a fantastic library, and a host of friendly and passionate writing groups. And further, in the National Park, the other wisdom of the bush. There’s a comfortable chair. And an occasional gentle, friendly knock at the door. Here is a place founded and maintained on an understanding that writing is a valuable, human, political, communal act – a reminder that writing grows not out of thin air, but in the soil of an encouraging and critical community. I arrived home not just to a new part-time job, but also thoroughly reinvigorated about what people can do with words.

I juggled a hundred elements to make a writing workshop – “writing through the body” – a success.  I spoke and read poems at a Literary Dinner, which was friendlier and more informal and fun than the name might indicate.  And mentored an emerging poet.  Oh, and spent time with some superbly keen writers groups – so down-to-earth they were almost subterranean.

Also, thanks to Janet and team at the Perth Poetry Club.  A great spot to check out the rich poetic grass-roots of Perth.