Poetry is an utterance of the body.  Not the best utterance – which is pre-linguistic and made of salt water – but the best a body can do given it has language.  It is language in thrall to the corporeal, to the pump and procession of the blood, the briefly rising spirit of the lung, the nerves’ fretwork, strictures of the bone.  Poetry is matter that can string itself between the pulse of a life and the silence of its death…  Those who reject form in poetry, reject form in body.  What they do is alien to what’s human…  Take the iambic pentameter for an example.  Its regularity shadows the poem: something must shadow the poem, and that something must in some way make the sound of the body at rest, so that the body in thought, at play, when it is heard can be believed…  The arrogance of obscurity is medieval, is of the cloister.  Obscurity cannot be poetry because the body is not obscure.  It may be interesting, it may be exciting, but only until we need oxygen.

When I read this, my own body made a little joyful shudder of recognition.  Yes, poetry is an utterance of the body, and that is how it travels from one person to another, across the gulf of difference and experience – through its biological affinity.  Then, one word stood out, awkward and almost arrogant – “the”.  Is there such a thing as “the” body?

Arguably, there is a human body.  But what of variation?  Male, female, intersex?  The disabled and the TABs (temporarily able-bodied)?  Does poetry travel seamlessly across all of these distances in the same way?  Or, to look at the question from another angle, are there as many poetics as there are bodies?  Is there such a thing as “women’s poetry”?  “crip poetry”?  And I don’t just mean in terms of content, subject-matter – I mean, in terms of rhythm, flow, metre, the way the words appear on the page and in the air. 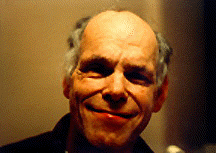 Recently, as a result of Pi O urging me to check out the poetry of Larry Eigner (by the way, this video of Larry reading poetry is great), I came upon a fantastically provocative and sensitive essay by Michael Davidson – “Missing Larry: the Poetics of Disability in Larry Eigner”.  Davidson explores why it may be that Eigner’s cerebral palsy is so rarely mentioned in critical discussions of his work – why that “blind spot”.   But he also reminds us that this omission isn’t just a biographical issue, but a poetic issue.  Eigner’s use of space on the page, his compression and brevity, his use of indentation and double-columns, the meticulous intensity of his poems – this is the way he chose to write, but it is also inevitably influenced by his physical condition.  He only had effective control over his right index finger, his body leaning on the (manual) typewriter, eyes close to the page, each word painstakingly pushed onto the page, each tap of the space-bar an effort.

What we write is shaped by our embodiment.  Not determined, but certainly shaped.  And this isn’t just about those bodies that are more visibly and obviously “disabled”.  Think about this –

What would it mean to think of Charles Olson’s “breath” line as coming from someone with chronic emphysema exacerbated by heavy smoking? Robert Creeley’s lines in “The Immoral Proposition,” “to look at it is more / than it was,” mean something very particular when we know that their author has only one eye (125). To what extent are Elizabeth Bishop’s numerous references to suffocation and claustrophobia in her poems an outgrowth of a life with severe asthma? Was William Carlos Williams’s development of the triadic stepped foot in his later career a dimension of his prosody or a typographical response to speech disorders resulting from a series of strokes?

These are big questions.  I’m just starting to think them through…  You, in your body, may be way ahead of me…