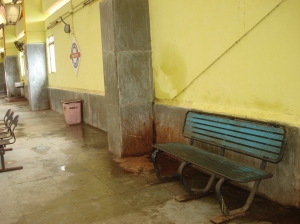 No particular reason for this including this photo – it just says Chennai to me.  It’s my local train station.  10 rupees gets me into the University and back.  There was a little panic in the news in Melbourne a while ago that some of the doors on our metropolitan trains could be forced open.  Here, the doors are always open, passengers leaning out of them as we hurtle through the city…

Anyway, back to poetry and medicine.  I just finished reading a fascinating book on “modern Ayurveda” by Jean Langford, called “Fluent Bodies: Ayurvedic Remedies for Postcolonial Imbalance”.  The title is good enough, but the exploration is brilliant.  To truncate its broad scope, basically she looks at how Ayurvedic training, knowledge and practice have responded to the modern world.  She concludes, among other things, that Ayurvedic practitioners have been torn between imitating the “scientific” and standardised approach of biomedicine and establishing Ayurveda as a valid and separate alternative.  The former seems to have predominated, but it is still haunted by the indefinability and mystery of the body as Ayurveda imagines it – this especially comes out in the (now fading) practice of pulse reading.  Anyway, a quick quote –

The modern state in its various brances cannot it seems enframe and enclose the social ethos.  Similarly, many practitioners seem to feel that modern Ayurvedic institutions cannot enframe and enclose the practices by which Ayurvedic knowledge is actually transmitted…  In modern Ayurvedic institutions, the illusion of an alignment between form and content seems to be less fiercely sustained than it would be for instance in the U.S…. Could the difference be partly that in modern India the dualism of form and content is more a syntagma to perform than an episteme to protect?…

Now, when I read this, apart from having to go and look “syntagma” up (it’s a linguistic arrangement), I really felt like Langford touched on something really crucial about the contemporary Indian mindset and way of being.  I’m still thinking what that exactly might be and mean, so any of your thoughts (or examples) will be welcomed with open arms.

So, while my project does revolve around medical tourism, there is also a lot of interest in Ayurveda from foreign travellers (certainly in the massage, a little less in the blood-letting and purging…).  That angle is fascinating to me – the sense that Indian people are giving Westerners what they believe we want – there’s some kind of “feedback loop” going on here I’m interested in unravelling.  I’ve just arrived in Mamallapuram, which has a little tourist enclave, so I’ll see what I can find out.

Last week I also gave a poetry reading at the English Department of the University of Madras.  After being generously and capably introduced by Professor Armstrong, and by Assistant Professor Ms Supala Pandiarajan, I read a series of poems from “Among the regulars”, interspersed with a few words about my background, the themes I’m drawn to, publishing in Australia, as well as pre-emptively translating some Australianisms.

I have to say, something about this event made me feel at home.  I’m very glad to have been able to read poetry to a group of intensely thoughtful (and thoughtfully intense!) young students/writers/academics.  What was particularly interesting to me is that there was a lot of questions about the creative process and about how a poem is worked on, shaped, finished, and how it can be assessed.  These are perennial questions, yes, but I suspect this is related to the University system also, how institutions baulk at marking creative work, leaving students to pursue those avenues externally (or not at all). 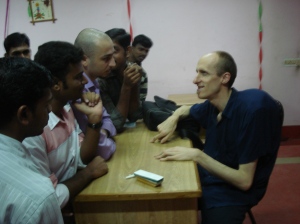 One more tiny thing I want to mention is my “Steripen Adventurer” – a little battery-powered UV wand that kills bacteria in water.  I’ve been using it for about a month now, which is a lot of plastic water bottles I haven’t been responsible for leaving behind.  I totally recommend it.  It comes with a solar charger, which I haven’t used, as my room hasn’t had sunlight coming in (probably a good thing that), but you can still charge it (slowly) from the wall.  The only real down side is that in some places and times, you can make the tap water safe to drink, but it still tastes awful.  After so many years of being separated, welcome back into my life – “Tang”!