Sometimes you may not want to know the poet behind the poem (let’s not go into that right now), but sometimes it’s unavoidable.  When I say “poem”, I think of a page – white A4, bound into a book, or some kind of virtual scroll.  Unavoidable and instant association.  And while I know there is a poet behind the page, culturally the page appears as some kind of mask.  The implied contract between reader and writer is to focus on the writing, and that the writing will involve a self or selves that both reader and writer readily identify with – but who is neither of them.  Reality is a metaphor.

I’ve been thinking about the relationship between the body of the poet and the body of the reader.  A close friend loaned me their copy of “Beauty is a Verb: the New Poetry of Disability”.  This anthology of poems and essays, edited by Jennifer Bartlett, Sheila Black and Michael Northen, is a brilliantly provocative (though US-centric) introduction to the advancing maturity of the “disability poetry” community.  It’s thrilling and confounding.  Because bodies are foregrounded, because the real world is not a metaphor, but unavoidably seeps through the page onto the fingers of the reader.  And, as we all know, skin is porous. 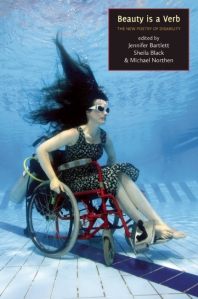 I want to quote two poems.  The first is by Jillian Weise, and also appears in her book “The Amputee’s Guide to Sex”.

When I asked you to turn off the lights,

you said, Will you show me your leg first?

I heard Rachmaninov through the wall,

a couple making love without prerequisites.

Do you sleep with it on? I forgot

there would be this conversation.

Do you bathe with it on?

I need to rehearse answers to these questions.

Will you take it off in front of me?

I once steeped into a peepshow in New Orleans.

Over the door, signs read: Hands off our girls.

Is it alright if I touch it?

I am thinking of a hot bath, a book.

The couple on the other side of the wall laughs.

She has found the backs of his knees.

What I love about this poem is its revelations and its withholdings, how it turns the usual mix of discomfort and furtive empathy that sex usually conjures into a productive and open encounter with another person.  I was going to write “encounter with the other”, but this poem proves such a phrase abstract and almost absurd.  We are reminded that sexuality is an encounter between particular bodies,  bodies that desire, but also can’t escape their history, politics and positions.  It begins with a moment of iconic intimacy, but its trajectory is interrupted – by the “old questions”.  She is pulled back into self-consciousness, memory and the allure of easier sensualities (a hot bath, a book).  The reader is taken, too, from this scene of intimacy into a peep-show, from the private to the (male) public, where broader questions of spectacle, exploitation, entitlement and ownership are opened.  And it is also no coincidence (I think) that Rachmaninov is the composer who seeps through the walls – a man who suffered depression and (arguably) Marfan Syndrome.  Bodies and their unerasable traces.

Weise is revelatory here.  She takes risks.  But while the poem ushers us into her private, bodily space, it also pushes us back out into the world, into ourselves and our own positions.  It re-presents us with the complicated, beautiful weight of our bodies.  Interestingly, “The Old Questions” is also an intensely visual poem that absorbs and refracts the gaze.

John Lee Clark’s poem “Deaf Blind: Three Squared Cinquain” engages with the visual and otherness in another way, both witty, mundane and sublime.

BARBARA WALTERS IS IN AWE

of a deaf- blind man

who cooks without burning himself!

Helen Keller is to blame.

Can’t I pick my nose

without it being a miracle?

I am sorry to disappoint,

but I am.  But nobody

would let me be one,

not even when I catch

a bus stinking of Nobodies.

ONE AFTERNOON, I FOUND MYSELF

walking with my cane dragging

behind me but still knowing

the way.  There was nothing

to see.  Everything saw me

first and stayed in place.

Again, one of the things I love about this poem is that Clark has placed himself firmly in the center of the frame (and I do mean this visual metaphor deliberately), but uses this turn the reader’s gaze back on the broader society – on stereotype and othering – and finally on our own subjective sensory worlds.  Not only do we find ourselves in a bus “stinking” of Nobodies, but we’re also drawn empathically into the experience of negotiating city streets as a blind person.  Knowing most of his readers will not have had this experience (and that some certainly will), Clark writes with a lightness and vividness that brings the poem close to a sense of epiphany, while never allowing his experience to be anything but everyday.  His embodied life cannot be appropriated, but it can be appreciated.  Like Weise, Clark uses honesty, movement (both poetic and physical) and discomfort to open up some vital questions.  The answers, like our bodies, our lives, are always ultimately outside the poem.

I said earlier, I’d been thinking about the relationship between the body of the writer and of the reader.  But it’s broader than that – I’ve been thinking about how different art forms affect us differently, how bodily presence is sometimes viscerally communicated, while at other times the body is theoretical, abstract, conjured but not felt.  Recently, I visited ACCA to see “We are all flesh”, an exhibition of sculptures by Berlinde De Bruyckere.   In the cavernous main room, two huge bodies hang suspended from industrial structures – they are horses and yet not horses, corpse-like yet somehow they have the weight and presence of life.  In another room, a museum cabinet displays branches and blankets.  In another, a lump on the floor becomes as you approach it a human figure, curled in on itself, as if wanting to escape a world of grief or terror.  Sticks, bones, flesh, intenstines, hair, history, colonialism, war, animality and humanity.  What sounds on paper grotesque is in presence beautiful and sympathetic (while always remaining viscerally and philosophically challenging). 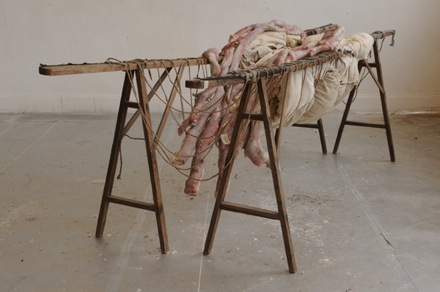 It’s not a cop-out on my part to say that it’s hard to communicate the power of these sculptures, but it’s at the heart of what I’m trying to get at here.  After going to the exhibition, my partner and I looked up more images of her work online.  In a short span of time, I found myself fatigued – the sense of empathy I had in the gallery had evacuated, leaving me with a sense of discomfort in the spectacle/spectacular, the freakish otherness of these bodies.

We have a visual culture, no doubt.  But there is a huge difference between the digital screen and the breathing body, between the reproduction and the original.  In the presence of a something or someone, you are in a relationship.

What’s that got to do with poetry?  I’m still unsure.  But I have an instinct that moves me towards readings – where poets take to the stage or microphone or just stand up and project their poems to an audience.  I don’t want to play that off against the page, like some contest.  I just know that when a poem is lifted off the page by a voice, pushed across the space between people, landing on bodies with skin, organs, hearts, histories and desires, the poem is changed and our relationships to each other are re-vital-ised.  Anyway, I have spent enough time now with this computer, thinking, typing, erasing, rewriting.  Maybe I’ll see you out there. 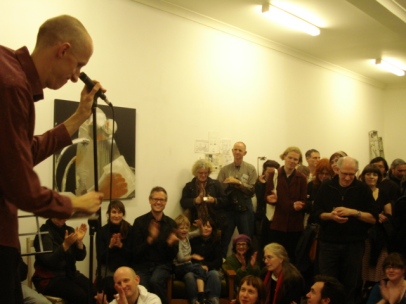