So, I’m about half-way through this residency.  It’s reached the stage now where I oscillate between blase and alienated.  A bit like rowing across a huge lake – you get used to the strain and rhythm of rowing, but now and then you look up and realise how big the journey is.  And you run the risk of becoming overly conscious of the task at hand.  Because in my experience, poetry is shy – it comes most often when you’re not approaching it head-on but sideways.  I can’t help now but wonder how much more progress I’ll make.

Anyway, stocktaking is boring.  So, what’s been happening?  I spent a week out of Chennai at Mamallapuram and Pondicherry, both gorgeous, charismatic and laid-back towns in their own way. 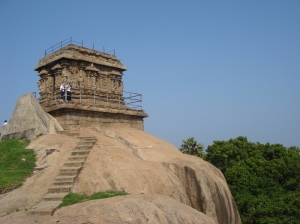 Mamallapuram is about 2 hours south of Chennai, on the coast – a small little fishing village that is surrounded by 6th century temples carved out of solid rock and by 21st century tourists.  Which means almost everyone is a stone carver and will offer to sell you something.  It also means there are lots of Ayurvedic businesses.  I had a chat with a practitioner, who told me 99% of his work is with foreigners, and most just come for massage.  A few seek out the more intense and in-depth treatments, but even then he finds that health success varies greatly with “Europeans”.  Apparently, since they’re on holidays, they don’t want to give up things like drinking and smoking (which kind of goes against the whole point of panchakarma…).  He also read my pulse – a fascinating process which felt both highly ephemeral and a little mechanical.  For the record, I am currently predominantly “vata”.

Pondicherry, being a French territory until the 1950s, and currently a Union Territory, means it’s oddly un-Tamil Nadu in many ways.  Apart from the obvious French architectural flourishes, the infrastructure (roads, drains, etc) are a little less ramshackle.  The city itself is noticeably more diverse than Chennai, in terms of culture, religion and cultural background.

On a less picturesque note, I’ve just finished reading a fascinating book by Dilip Menon called “The Blindness of Insight”.  Basically, it’s a series of four essays about the central, though often ignored or elided, role of caste in Indian society and literature.

there appears to have been [in the 19th century] an intimate connection between the social criticism of subordinated groups and an anguished and persistent engagement with the emancipatory potential of religious conversion (eg Ambedkar).  Elite groups too turned to a refashioning of tradition (eg Vivekananda), but for them it was easier to find a habitation within the resources of Hinduism…

Menon, to me, reminds us that caste shapes not only social interactions, but is a crucial element in how people experience religion, family, social support structures and health.  There is no monolithic, static experience of these ideas and institutions.  He also implies that marginal people, when they manage to find the resources to seek change, look instinctively to revolution rather than to recuperation.  This has been an illuminating element in my slow, long education in the complexity of this place.

Next week, I hope to meet a doctor who works at a Medical Tourism Agency.  Should be fascinating.  But I’ll leave you with this thought…