In 2013, I travelled to Ireland to perform “Ambiguous Mirrors“. Very soon, on Sunday 17th May at 5pm, at Thousand Pound Bend, I’ll be performing this piece to a Melbourne audience. This short performance is very personal to me. It meditates on grief, family and genetic inheritance. And the puppetry adds another, profound layer – evoking deep emotion and a sense of the uncanny.

The night also features four other puppetry-poetry collaborations – Lia Incognita with Beth McMahon & Michael Bevitt; Barry Dickins with Rod Primrose; Jennifer Harrison with Victoria Osborne; and Terry Jaensch with Eliza-Jane Gilchrist. This should be very special. If you can make it, please join us – details on the flyer above.  Bookings essential and available here.

I also have a number of poetry readings in May, so please check the Readings & Performances tab for more info.

I think we all suspect that intercontinental flight is unnatural.  After arriving back from Ireland, I was jetlagged, both physically and existentially.  Here’s a reflection I wrote on that, as a contribution to a fantastic philosophical-poetic-embodied blog called tract-trace.

As some kind of companion to that, here’s a few photos from Ireland.  We’re incredibly grateful to Arts Victoria and to all our supporters through Pozible for helping us to get there, and to Dr Robyn Rowland AO for organising the tour and for her deep hospitality.  “Ambiguous Mirrors” was performed in Galway, Cork and Clifden to an audience that was sensitive, generous and thoughtful.  We look forward to its ongoing reincarnations. 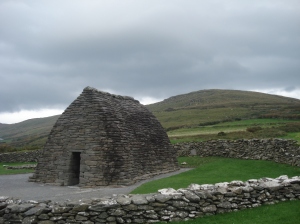 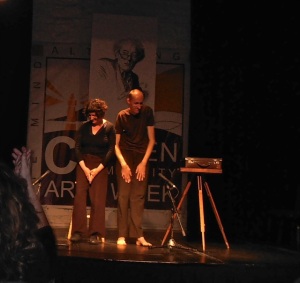 What do those four words have in common?  In the best blogging tradition – me.

October’s been a huge month.  I’ve been adjusting to a new job, ten hours a week (2.5 hrs x 4 days) at a medical library.  Plus, planning and preparing for the tour of the Australian Poetry Omnibus Mobile Library – which included a trip up the Maldon Folk Festival (a fantastic, vibrant, daggy, rain-enduring festival).  And I’ve also been preparing my application for Masters of Arts (Creative Writing) at the University of Melbourne.  If the door’s open (and if there’s a pile of scholarship money awaiting), I’ll be researching and writing about how unusual/abnormal bodies make themselves known through contemporary poetry.  Any thoughts on this topic would be hugely appreciated – from any angle – theoretical, poetic, personal, political, etc…

This week – I’m performing at La Mama Theatre in Carlton – that wonderful, iconic, intimate theatre venue.  They do a series of short seasons for experimental works-in-progress called “Explorations“.  I’m performing an adaptation of my poem “9/10/1973 M3”, called “Ambiguous Mirrors” – it’s a puppetry and poetry collaboration with Rachael Wenona Guy.  Details below.  An edited clip of an earlier version is here on You Tube. 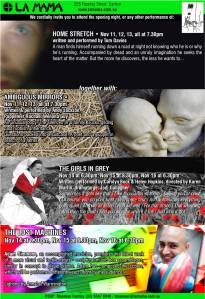 Also, now that my book “Among the Regulars” has been out for a while…  how does anyone get reviewed?  Is this because reviews are rarely published?  Is it because people write more than they read?  Do we just not have much of a reviewing culture?

In April this year, at La Mama Theatre, and then this week, during the 2009 Overload Poetry Festival, I performed alongside Rachael Guy and David Churchill in a piece called “Ambiguous Mirrors”.  It’s a 12 minute collaborative piece, combining puppetry and poetry, with live cello and voice.  I talk about my father, Norman Charles Jackson, born 1926, died 1973, of complications from the same genetic condition I have.  The poem is a blur of my searchings for him – sincere, complicated, clumsy and fated searchings.  The puppet is me, and echoes of him.

With any luck we’ll do it again sometime.  Last night we were awarded Overload’s “City of Yarra Award for Most Innovative Work” (in a festival that was full of originality, I felt, so this was quite an encouragement).  It’s exhausting to perform, in a way – little barbed tears tend to well up no matter how cold I feel.  It will get easier, I’m sure.  Performance is, I suspect, a kind of doubling – being present and detached simultaneously – while poetry, traditionally, for me has meant pure autobiographical bodily communication, presence.

Enough.  Anyway, thanks (as I hope I said on the night) to Rachael for her exquisite puppet and voice and performance, and to David for his sheer unshakeable tones.  And to Kate Hood, who provided sensitive and intelligent direction.  And thanks to the City of Yarra and Overload.

Overload highlights?  Ali Cobby Eckermann, Maxine Clark, Lewis Scott, Barry Dickens… and the fact it only went for 10 days.  You can have too much of a good thing.  I feel tired, but fuelled, excited to get back to the page.

I’d like at some point to post up a few ghazals, and some thoughts on form.  For now, let’s just say, I’ve written two dozen ghazals, felt their concise, disorienting, rhythmic textures, become addicted to the stitching together of loosely-connected couplets, grown a little fatigued of the close-up editing required, and now itching for the horizons of free verse again.

Next time, not so long between posts…